With most airline WiFi you have to wait until the plane is in the air and at a particular altitude before the WiFi service is available. That is slowly changing with more and more airlines offering a “gate to gate” service. Norwegian announced this week that they will be offering the service on their flights. […] 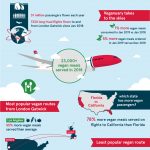 Norwegian have released some interesting data that shows an increase in demand for vegan inflight meals. It could indicate that more people are switching to veganism overall. There’s some rather amusing insights in the data they’ve shared: 78% more vegan meals served on flights to California than flights to Florida 25% less vegan meals served […]